First of all, here's the biggest reason I've been so excrutiatingly slow with getting this part together (at least that's my story, I guess I've had other things on my plate too...): 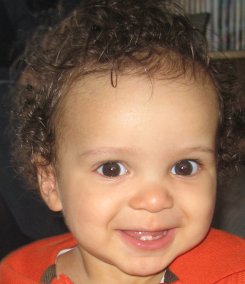 Tristan is 13 months now, and a real menace to my laptop (pulling off keys and drooling on the screen) and anything else within reach, and a real attention seeker...

So, whenever I'm slow at posting a new part, I'll blame him. I have no part in the delays at all, of course. None. I'm completely faultless...

For starters, here's the commit that covers most of this

To support define_method we need to support blocks with arguments. Really, full closures.

If you haven't already, you should read my post on closures

to be mostly equivalent to:

For our attr_* implementation we actually want more:

(or, as it turns out, not really that, as I realize the above can be simplified - if we have a lookup function to lookup the symbol to instance var slot, we can just use our index primitive to get the address; we'll return to that, but the above is the current state of attr_reader)

What that calls for is actually proper closures. One step harder.

There's the other issue that the above will be really inefficient. As in, requiring a hashtable lookup on every call inefficient, when we can statically determine the offset for any instance variable we know about at compile time. We'll get back to that at some point too, but if you've been following this series you know I care about getting things working first, efficient second.

For now attr_reader and friends still serve as a useful test case for basic closure support.

The first step towards closures is actually easy (we've already done it). We have our :lambda primitive that creates an anonymous function (which isn't really anonymous, it's just that the name is quitely created in the compiler and not accessible to the programmer).

But an anonymous function is only of relatively limited use if you can't bind variables to it - it's not much more than a function pointer in that case.

So how do we let "sym" hang around, and how do we take advantage of that for define_method?

First, let us consider how you can call a lambda in Ruby:

We could implement Proc#call via yield by passing the block as an argument to a method, if we wanted to, but that would probably be more inefficient than implementing both in terms of a primitive.

But this means those are the only things that has to explicitly know how to deal with the environment.

That gives us an interesting option. We could turn:

And we could have it inherit Proc. yield in that case is just rewritten to block.call

This does however have the troubling implication of messing with self, and as this irb session shows, we'd have to fix that:

The other alternative is to create a lightweight environment binding of sorts. Oh wait, we already have that. It's called an object. The problem is not the class above as such, but creating a full class for each block. We could do something like this instead:

Here's a simple example using a closure. Note the use of s-expressions here because we're now starting to get bitten by the changes we've done to turn Ruby code by default into method calls (the way it should be) without having put in the pre-requisite work to implement the number classes and Kernel methods (such as print to replace the libc printf). Ignore that for now.

And here's the expected output:

And here's the syntax tree after we've done the required transformations (more about that in a second):

That's a bit of a mouthful, so lets go through it the new bits

Then we allocate the environment. We copy the argument, and from now on we use (index env 1) to refer to step. We then carry out the cnt = 0 statement. cnt and step are both moved into the environment because they are used inside the closure.

Then we create a function and assign the address of the function to __tmp_proc. As you can see there are tree synthetic arguments to it:

self,__closure__ and __env__. The first is, as you'd expect, the object the method is called on. The second is to be used when passing blocks to a method, and the third is used to refer to the environment when inside.

(Something I just realized: We're begging for a name clash, if there's a closure defined inside that needs a separate environment. Obnoxious details; later)

And this monstrosity is what cnt = cnt + step was turned into.

Now, to make this work, we obviously need this __new_proc function, and a Proc#call that's sensible. Here's our current Proc:

Very simplistic and rather ugly, but it does the work. As you can see, the environment pointer is stored in the Proc object, and Proc#call hides the ugliness.

You may notice that this is inefficient - an extra level of indirection. Indeed it is - we can in theory make the environment part of the Proc object and save an indexed lookup, and there's a bunch of other tricks waiting. But again, that's optimizations we wont deal with now.

For now, lets move on to how to do the appropriate changes to get the example output above.

Some refactoring, and a few rewrites

Almost all the changes for this is in the Compiler class, and the code in question is now in the transform.rb file. There are some other small changes, but I don't think they need to be covered in detail.

Specifically, transform.rb represents the start of a bit of refactoring.

Some constructs in the Compiler class can be built easily on top of more primitive operations. lambda was an example of that.

Overall, a lot of things can be done by rewriting the parse tree. Doing it that was has the distinct advantage that it's possible to switch the various rewrites on/off to debug their effects, and to see the result long before it ends up as machine code.

As a first step, transform.rb contains methods that solely rewrite the syntax tree. They are still currently part of the Compiler class, and do make use of the Emitter (specifically Emitter.get_local to get a unique label), but this can be changed later.

Unfortunately not all of these rewrites are small and simple.

In this round, we're left with three:

rewrite_strconst used to be in compiler.rb and is mostly unchanged.

rewrite_lambda replaces the lambda handling in compiler.rb with a rewriting step that looks like this:

What this rewrite does, is use our Array#depth_first method from extensions.rb to descend down the parse tree looking for :lambda nodes. It will skip any :sexp nodes, as they are used as "guards" to mark areas that should not be touched by rewrites.

When it finds a :lambda, it will replace the :lamda with this:

Effectively defining the lambda (as we did before), but then calling __new_proc with the result. You'll note __tmp_proc is seemingly superfluous. It is in fact a workaround for a slight problem: The call needs to be within a sexp to not be rewritten to a callm (Ruby method call), but the defun can't be within a sexp, or other rewrites won't touch the body of the defun.

We'll clean that up later.

The goal of this one is to identify variables in the methods - this used to happen in the parser in a really simplistic way - combined with identifying :lambda nodes (and so this must run before rewrite_lambda) and lifting variables that are used inside the closure into an environment, and update the :let in the surrounding method definition to have a suitable environment.

It then also adds code to allocate the environment, as well as to shadow method arguments. Finally it rewrites accesses to variables that have been lifted into the environment, so that it uses %s(index __env__ offset) instead of the variable name.

Let's go through the code.

We're hunting for :defm nodes only. Everything else will be ignored.

We remove the method arguments, as we'll use vars to create a :let node later on.

If find_vars found any variables to make part of the environment, we need to:

Tack on the extra assigns and the body.

Then we create a :let node with the new variable set, including __env__ and __tmp_proc which we've seen elsewhere.

Finally we skip any nodes below the :defm so the depth_first call does not waste time.

The purpose of find_vars is to identify variables that should be put in a let node as well as that should be part of a closure environment. This one is hairy, and a clear candidate for looking for ways to clean up later

First of all, if we've been called with a nil expression, there are now variables to return, and the same environment passed in.

Special casing on :lambda because if we're handling a closure, and variables found inside the closure that were defined outside means that those variables needs to be lifted into the closure environment we're creating so that they're not allocated on the stack.

Finally we special case on :callm and :call when handling the remainder, because they have arguments that are not sub-expressions to be considered when creating the closure environment.

If n is a variable that does not exist in any of the scopes we keep track of, and it is not part of the environment, and it's on the left hand of an assign, we add it to the top scope.

NOTE: This current version is buggy. Not every variable potentially occuring on the left hand side should be added, just the one assigned to.

If it is in a scope and we're in a lambda, then the variable needs to be moved (deleted) from that scope and added to the closure environment.

Finally let's look at rewrite_env_vars. When we've gathered together all the variables for the closure environment, we have an array, and any accesses to those variables needs to be rewritten to (index __env__ num). That's done like this, and I hope this one is simple enough not to go through line for line:

We still haven't actually added support for define_method, but we now finally have most of the plumbing. That's the next step.

Then I want to start alternating between something more practical: Making the compiler compile early/simple versions of itself, and let it "eat its own tail" so to speak, and secondly to start refactoring and cleaning it up.