At Edgeio we had a fairly complicated network setup, and at one point I quickly hacked together a Ruby script to merge the paths generated by multiple traceroute runs together into directed graphs, showing the routing from a few selected host in our environment to all our other hosts. I generated dot-files suitable for Graphviz from it.

It was a helpful way of looking for weird inconsistencies in routing, in particular between our two locations.

Here's an example of a traceroute from www.hokstad.com to www.gmail.com, docs.google.com and www.google.com (scaled down): 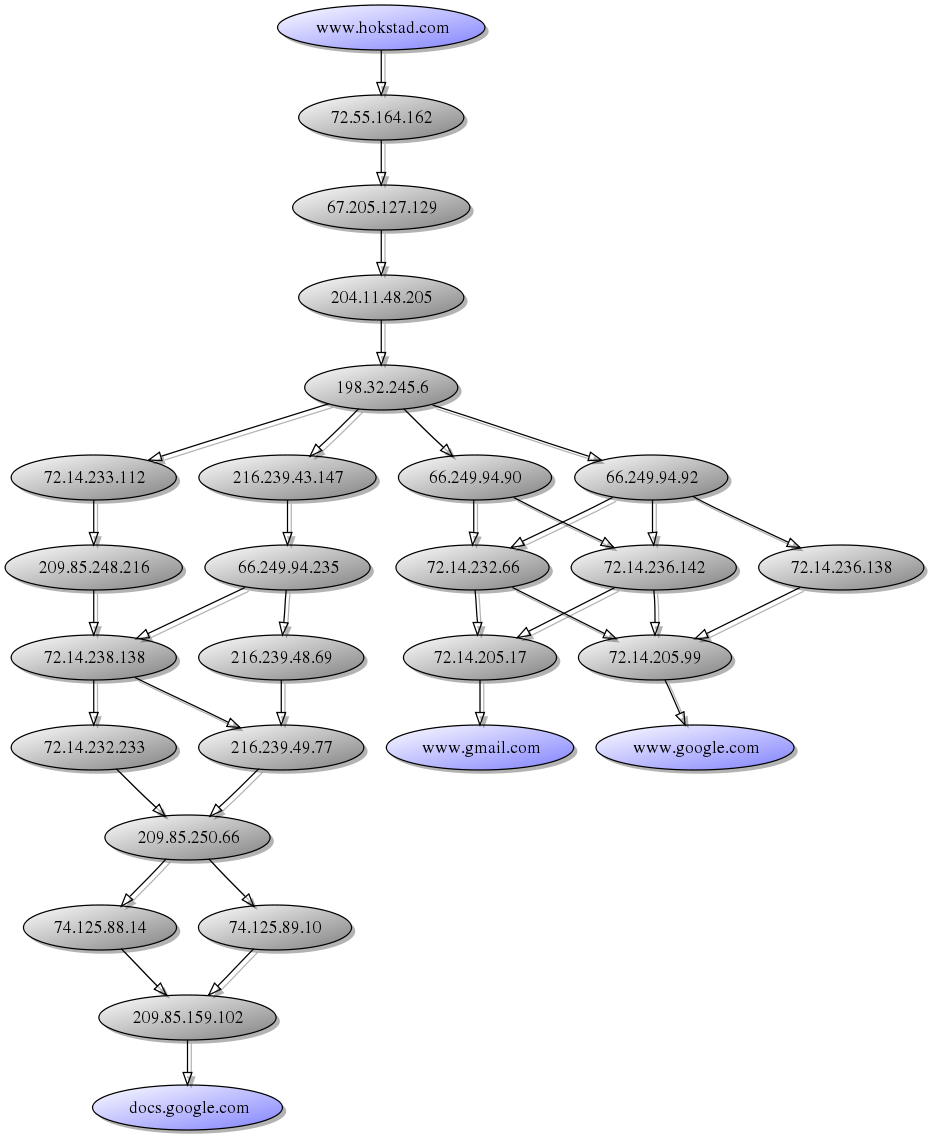 There's a couple of caveats: I just strip out failed probes, and I don't try to reconcile the names of the endpoints (which I preferred to include for readability) with the IP addresses of the trace, so the first/last grey nodes before the named/blue nodes may be redundant.

This script by default runs traceroute 3 times for each target, and that's the reason why there are more possible paths than endpoints, and it illustrates failover and/or load balancing mostly, but can also be affected by fluctuations in dynamic routing. It's usually fairly stable, and in fact at Edgeio I found several network problems by re-running the script when something was up and looking at how the routing had changed. 3 runs seemed sufficient for my use, but for large networks adding more may give a better picture of the routing.

You can find the full script here, but here are the guts:

First I defined a convenience method to run traceroute and capture the output. This is intended for a POSIX OS (Linux / Unix / BSD's), but mainly requires a working traceroute where the output is a number of lines starting with a hop count and then the ip address. TRACEROUTE must be set to a valid traceroute command.

The TraceViz class does the gruntwork. @edges contains the edges of the graph, in other words which pairs of ip addresses represent a hop further in the network. @nodes contains a set of the ip addresses found. @targets contains the hostnames of the start and end-points - it's used only to style them differently:

The #trace method executes the traceroutes, and enforces a timeout:

#process_trace handles the parsing of the trace, by splitting the output into lines, extracting the IP addresses, and then adding each of them to @nodes, and adding each pair to @edges. I don't care if we've seen them before, since I use Set's so the previous (identical) nodes/edges will just overwrite the same values:

Running it and generating the image

First run the script to generate the dot-files, and then generate an SVG file from it:

Optionally, process the script with my XSL transform to make it prettier (adding the gradients from above etc) - I'm using xsltproc from libxslt:

Then I used "rsvg" from librsvg2 to turn it into a PNG:

Of course these steps are easily enough wrapped into a script.