The main reason for handling re-opening of class-definitions at this stage, is for a simple reason:

We're going to attack eigenclasses soon, and being able to handle class re-opening makes that a lot simpler in addition to being needed in and of itself too.

Part of the reason is that I made the choice way back in part 19 to use vtables as the basic method for dispatch, and while vtables make for fast method calls, there's extra book-keeping required if we allow re-defining a method, which Ruby of course does.

But how does that affect eigenclasses?

A quick refresher on vtables, and how this fits with Ruby

As you may or may not remember, this involves an array in the class object with a pointer to each method. This is what an instance, and its class (which is itself an instance of Class) looks like today: 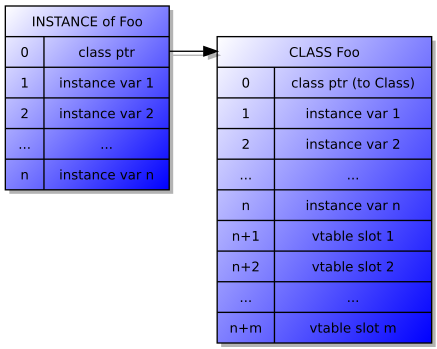 (the left column represents the "slot" in the object structure. With our current 32-bit backend, this is a multiple of 4 bytes offset from the start of the structure)

This is the standard approach for virtual method dispatch in languages like C++. There it is easier than in Ruby for a few reasons:

It's this last one that makes re-opening classes and Eigenclasses tangled up for us. Consider these two variants:

While in the latter case it's not as explicit, in both cases we're handling first class Foo, then opening Foo's eigenclass, then handling class Foo again. While we can optimize away some cruft here later, to merge processing of adjacent definitions (so that e.g. defining self.foo and self.bar right after each other maintains the same scope), that's extra complexity that does not solve the wider issue.

There is one obvious issue with trying to re-open a class with vtables: What about sub-classes?

Consider our earlier example fleshed out a bit more: 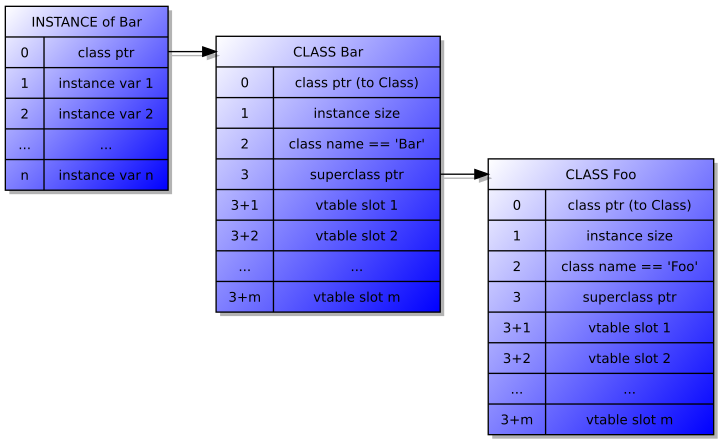 What do we now have to do if we want to override, say, vtable slot 2 in Foo? Well, that depends on Bar:

So we need to expand the Class instance variables to let us find the sub-classes of any given class. As an example, I've added in a Baz class which is a second subclass of Foo. So this: 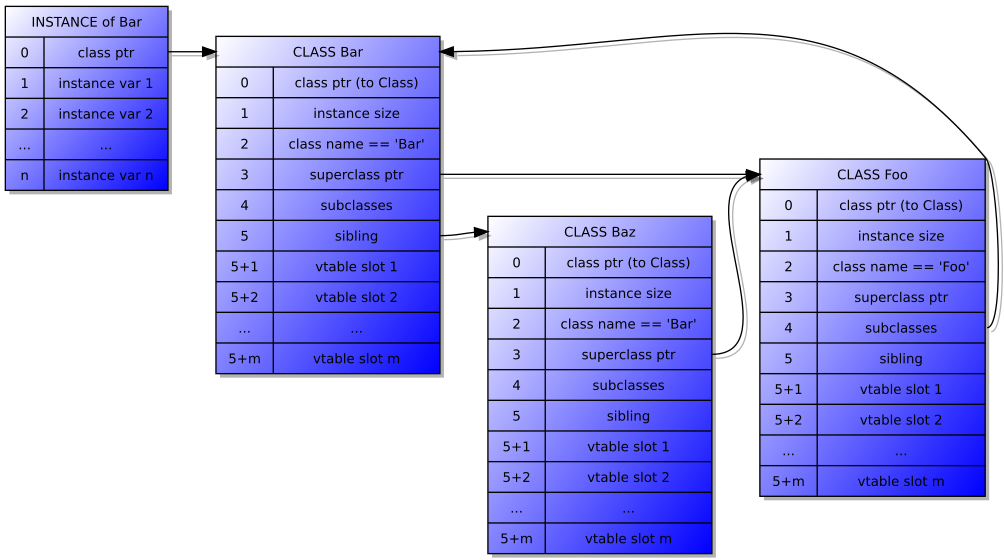 This leaves us with these steps to set a vtable slot:

(Instead of using a pointer to the first subclass, and a chained linked list like this, we could use a hash table or array, and we might very well do that at some point, but not now).

I've added a test case in 02021ad which simply exercises the basic scenarios by creating a class and two sub-classes - one for which a method is overridden - and then re-opens the base class and overrides one of the original methods.

One of the first things to overhaul is the method I introduced way back at the start of this series to keep track of functions we want to output.

While Ruby does not have functions, we turn every method we find statically into something that looks much more like a function, and name it in a reasonably human-friendly way in part to make it easier to debug the assembler output.

You can check out most of this (all of the handful of lines) yourself, apart from the new globals.rb which contains the meat in this method (in b88a31b):

All this does is append __

The reason we need to do this is that we now of course can have multiple Foo#bar methods at various stages of the execution.

To allow re-opening classes, we need to not blindly create new class objects as we did before (though we're still assuming the class and its name is/was possible to determine statically. This is the change, which basically wraps an if check around the old version:

Next up we assign two extra instance variable slots in the class objects:

You'll find the remaining bits in 4733be0, and we'll look at lib/core/class.rb in more detail.

Firstly, this part of __new_class_object is new:

Basically it simply links this class into the list of sub-classes for it's superclass, by prepending it to the head.

The more interesting bit is __set_vtable. This was previously the over-simplistic:

This boils down to this "pseudo-Ruby" which follows the algorithm sketched out earlier: